Why has our state education system retreated on the right of parents to secure a secular education for their children? 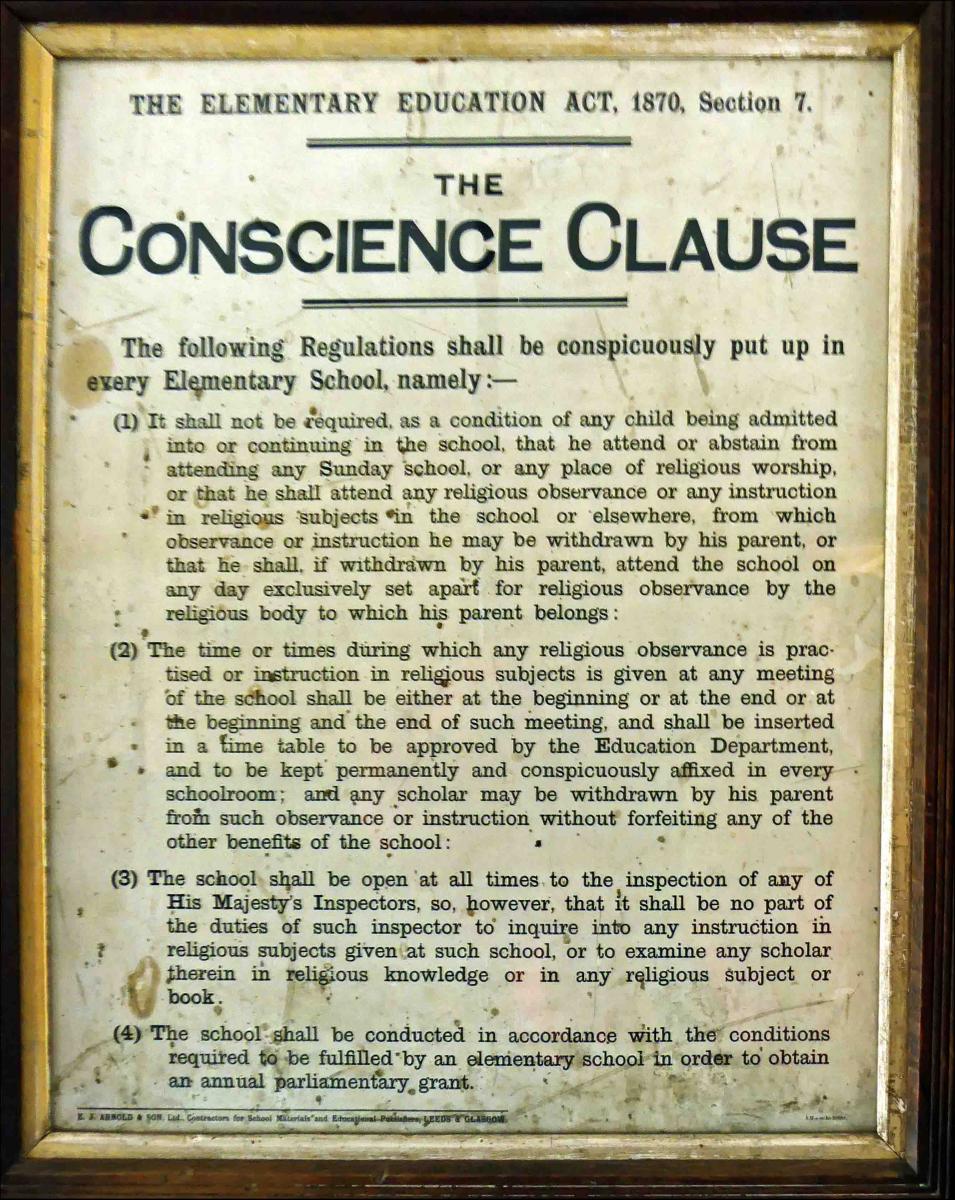 We recently visited the Beamish museum in Co Durham. This is a brilliant and highly recommended outdoor museum with many sites connected by a tramway. One of the sites features a colliery and ‘pit village’ set in the early 1900s. It contains a ‘Board School’. Such schools were set up by the 1870 Elementary Education Act. The Act required local ratepayers to organise the building and running of a new elementary school to ensure that every child should have a place in a reasonable quality school building with a certified headteacher.

Displayed In the school I found a statutory notice of a provision of the 1870 Education Act, Section 7, entitled, ‘Conscience Clause’ (above).

Section 1 appears to go further than the 1945 Education Act in prohibiting the imposition of religious observance on children and their parents as a condition of attending a school.

Section 2 states the right of parents to withdraw their children from any religious observance or instruction "without forfeiting any of the other benefits of the school".

Section 3 prohibits HMI from questioning any pupil as to their religious knowledge or understanding.

Two of our grandchildren have attended a Local Authority controlled Nursery and Infants school in a local 19th century school building. This has a plaque recording the establishment of the local School Board and the opening of the school. While we have been generally happy with the school, teaching is heavily referenced to Christianity and all children are taught to pray on all sorts of occasions in the daily life of the school, which is regarded as normal by parents, very few of whom are churchgoers. This was also true of the Leicestershire primary school attended by our own children.

This is so normal in English primary school education that I wonder if the ‘conscience clause’ was ever enforced in schools.

What I don’t know is if Section 7 of the 1870 Act also applied to ‘voluntary Church provided schools’ at that time.

What is certain is that the right of parents to have their children educated in a secular school that conforms to the 1870 ‘conscience clause’ is now far more restricted and becoming ever more so. Many parents do not have the local equivalent of an 1870 Board School and are compelled to send their children to a ‘faith school’, many of which do not comply with the ‘conscience clause’.

Present day faith schools run by Christian or Moslem groups are not known for their enthusiasm for admitting children ‘of all faiths or none’,  let alone operating a ‘conscience clause’ in respect of those forced to attend. There are even examples of religious organisations taking over LA controlled schools thereby forcing parents to accede to a faith-based education of their children. This has to be seriously wrong.

The government clearly has no such concerns because despite the general population now having a majority of adults that self identify as having ‘no religion’, the DfE is openly encouraging the creation of more faith schools as well as Academy and Free Schools that are beyond the influence of elected Local Authorities.

If any reader knows more about the 1870 Education Act in relation to the ‘conscience clause’, then please comment.

' ....how the school prepares pupils ... mutual respect for and tolerance of those with different faiths and beliefs and for those without faith.'

I was on a course for school governors recently. The trainer asked if, and how, we knew that our schools were meeting the British Values requirement about ' ... mutual respect for and tolerance of those with different faiths and beliefs and for those without faith.'

Lots of answers about visitors from a range of faiths, visits to varied places of worship, assemblies led by different faith groups, materials in the school library and RE lesson content.

Then he said 'The requirement also says ... and for those without faith. What about that?'

From 1989 to 2003 when I retired, I was head of an inner-urban 11-16 LEA maintained school. We made clear in our prospectus that we were a secular school. There was no 'Daily Act of Christian worship' or any other sort of worship. Although there was a 'philosophy-based' weekly RE lesson in KS3,  it would not have satisfied SACRE. Religious education was included in the core KS4 Integrated Humanities GCSE course, but this too was not about 'faith' other than awareness of the main tenets of principal world religions.

There was a whole school assemby every Friday morning where we usually had a guest speaker. There was a 'panel' of such guests, which included local CofE and RC Ministers, as well as others from non-religious local organisations and sometimes charities. The rules for our guest speakers were strict: no mention of God and no praying. Most of the Christian Ministers told a story of some sort, often true (with the names changed).  Some of the Ministers were less comfortable with this than others. The best were truly outstanding, inspirational, well liked by our students and listened to with rapt attention. I particularly remember a senior RC MInister in his 70s. He always engaged his audience and took a deep interest in our school, admiring the high quality relationships, which I suspect he compared favourably with the local RC school where he had formal responsibilities.

All of this had the full support of governors, staff and the Senior Management Team, which contained two devout Catholics active in their churches. Our RC Deputy Head was also active in the Diocese and had close links with the Bishop. We were in no way 'anti-religion',  just insisting that there was no place for 'faith' in a school, other than as personal matters for parents and their children. I started teaching in 1971. Apart from a short stretch at a prestigious boys' grammar school in Leicester, none of the (comprehensive) schools I taught at complied with the law in relation to 'Acts of Worship'. At the 14-18 Leicestershire Upper School, where I was Curriculum Deputy, there was no RE taught at all. The law is long overdue for change.

You might think we would have had trouble with OfSTED. Not at all. Successive inspections heaped praise on the school especially for the behaviour of pupils, the quality of relationships and the amount of community involvement of the school and its students.

Each OfSTED report contained a sentence stating 'that the school did not fully comply with the requirements for a daily Act of Worship', and that was it! They praised the god-free assemblies.

As for the assumption that 'no faith = no morality', you are right that this is the common assumption. It could not be said of our school. See