Education Spending: Up under Labour, Down under Conservatives 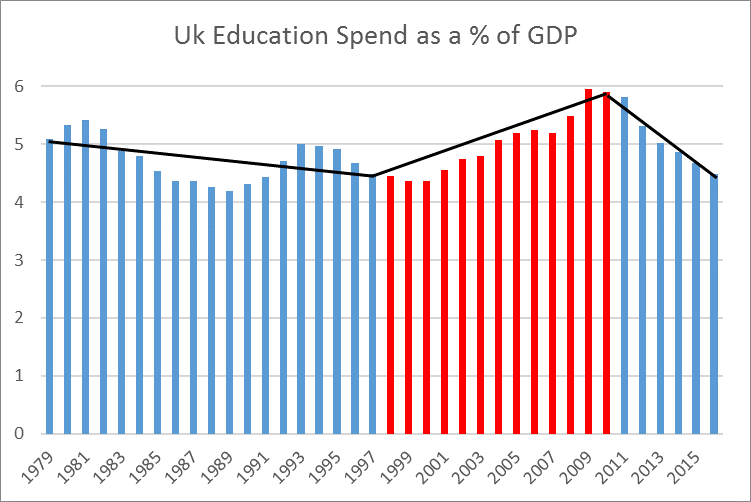 With campaigning underway for the general election, the key issue in education is funding. The recent IFS report noted that "between 2010–11 and 2015–16, it [education spending] has fallen by about 14% in real terms". The Public Accounts Committee noted that the schools element of the education budget is projected to fall in real per-pupil terms by £3 billion by 2019/20, representing an 8% cut in the schools budget.

Analysis of government spending on education since 1979, taken as a % of GDP, shows that this pattern is not unique to this government. Under Conservative governments, overall education spending has consistently fallen. Under the Labour government, it rose substantially.

The differences are significent. After the 1997 "education, education, education" election Labour took 13 years to increase education spending from 4.5% of GDP to 5.9%. It took the coalition and Conservative governments just six years to reduce it back to 4.5%.

These figures represent all educational spending, including 16-18 provision and higher  education. However even the Conservative claims of maintaining school spending (for ages 5 to 16) is based only on revenue spending. Capital spending on schools has fallen significently and the National Audit Office now estimates it would cost £6.7 billion to return all schools to a "satisfactory or better" condition.

When all these elements are included the years 2010 to 2016 saw one of the largest falls in education spending since the war. The table below shows total educaiton spending as a % of GDP at the government turning points, and the change under each party.