Grammar Schools: The chart that says it all

This chart is taken from this article in The Conversation, and shows the proportion of children that get into grammar schools by affluence (from the least affluent on the left to the most affluent on the right).

We have long known that children on free school meals are a tiny proportion of grammar school intakes, less than 3% (according to the Sutton Trust), compared to an 18% average in the communities they are based in.

The bias is not due to academic ability

The researchers went on to compare the proportion that got into grammar school with results in Key Stage 2 SATs, to see if the difference could be explained by any gap in academic achievement. There remained a dramatic gap:

This may be due to the ability of the better-off to pay for tutoring to the test. 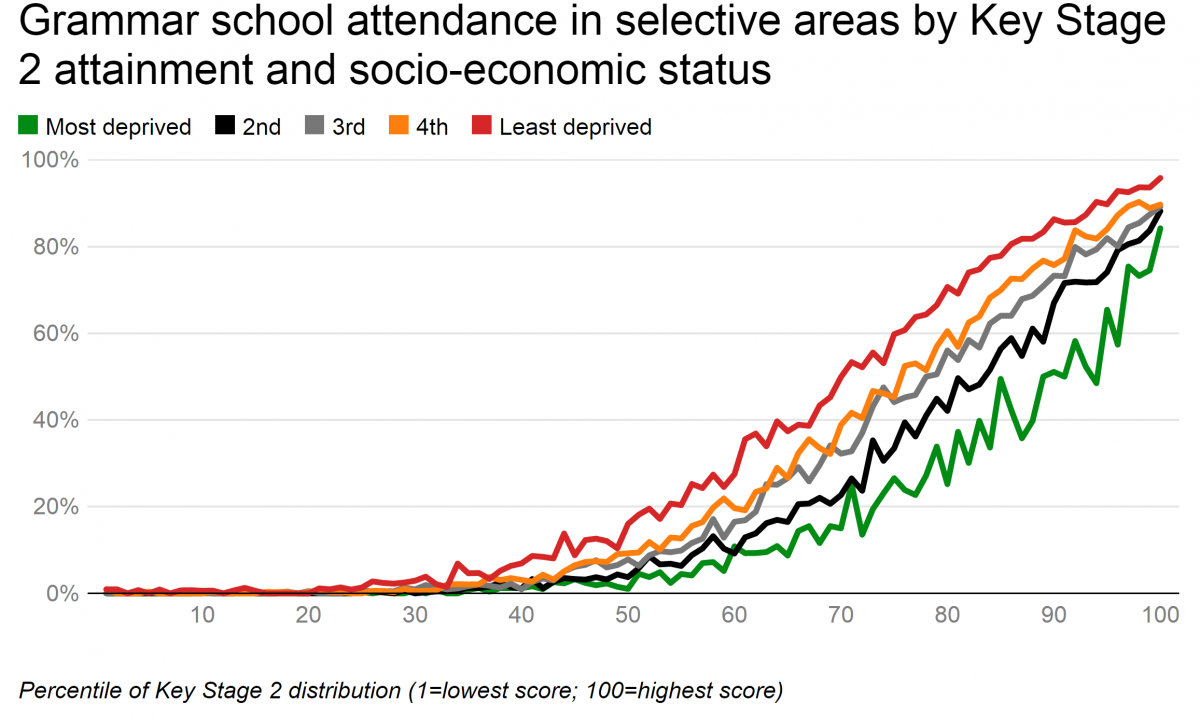 Whatever effect grammar schools have, this research shows very clearly that they are a means to less social mobility, not more.

Henry, we both agree that

Henry, we both agree that grammar selection is a really bad idea, but your article repeats the error that I discuss in mine on the same subject.

The error is in assuming that KS2 SATs are a measure of academic ability. This is what I write.

"Children are not admitted to grammar schools on the basis of ‘academic attainment’ measured by KS2 SATs. The 11+ is an IQ test. It is designed to be a snapshot of general intelligence, which is a far better predictor of ultimate academic attainment than curriculum-specific attainment tests, of which SATs are an example. Grammar schools have always done this because within the educationally flawed ‘fixed intelligence at birth’ paradigm, it works for them.

The 11 plus is not the only IQ test widely used in the English education system. There are also Cognitive Ability Tests (CATs). These are currently provided by GL Assessment, a commercial company that doesn’t like the CAT being described as an intelligence test. CATs are used on a large scale by many Academies and Multi-Academy Trusts as the basis of ‘Fair Banding’ admissions systems, which successfully ensure that comprehensive schools really are comprehensive in that they contain a balanced mix of pupil abilities. CATs test data produce the same social pattern as the 11 plus results, in that the lower bands are dominated by pupils from poor SES families inviting the same false conclusion that the schools that use the tests are somehow discriminating against children from ‘disadvantaged’ backgrounds.

The fact is that poor SES postcodes are characterised by a significant excess of children with lower average IQ test scores. The 11 plus and Y6 CATs are simply the evidence that this is the case."

The truth of this will be evident in Hackney secondary schools which use CATs tests for admissions to the quartile or quintile bands used by the schools. My research for the section in my book about Mossbourne Academy revealed that in Hackney as elsewhere, the top admission bands are dominated by more affluent families and the lower bands are massively oversubscribed (certainly at Mossbourne) by children from the poorest postcodes.

The reason that SATs results are more reliable than CATs results in the case of children from poor Socio-Economic Status (SES) homes is down to their high stakes nature for the schools. If the penalty for failing the DfE's and OfSTED's floor targets are high enough then the SATs results get raised by all all available means, many of which are not in the long term interests of the children subjected to those means. I discuss this in my article.

"Poor SES communities characterised by low average IQ children are served by primary schools that are permanently threatened with closure (and the sacking of the head) for failing to meet floor targets. Such schools can fall victim to educational snake oil salespersons that promote behaviourist, knowledge-based, abusive discipline approaches, that the Conservative Party, the DfE and Donald Trump all love.

These methods do not develop cognitive ability or much else besides Gradgrindian conformity and obedience. They may actually make children dimmer and therefore less likely to do well on IQ tests used for secondary school admissions including grammar schools. Their methods work with SATs but not CATs or other IQ tests. Hence the illusion of ‘high academic attainment’ that does not translate into passing the 11 plus. Worse still, there are now secondary Academy Chains and individual schools that use these behaviourist methods to cram pupils for GCSE, with the same claims for success.

In our primary and secondary schools the DfE seems determined to make the quality of teaching and learning worse and the experience of our children and their teachers even more dismal.

In summary, grammar schools do not discriminate against children from poor backgrounds. They just insist on an IQ test threshold for admissions. It has long been established that the children of well-educated parents do better at school. The CATs data show that, whether by nature, nurture or both, such parents tend to produce higher IQ children. The higher the level of parental education, the less likely are the families to live in areas characterised by poor SES. They can afford to move ‘up the housing ladder’, so they do. Therefore high IQ children will be scarcer on the ground in low SES areas resulting in the pattern observed in the research [that Henry quotes - as in the Guardian article].

I realise that these truths are as unwelcome to many on the left as they are to those on the right that run the English system. 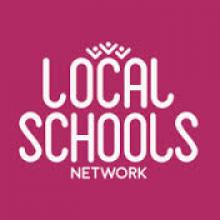 It would be interesting to

It would be interesting to see whether the same applies to local schools who have a proportion of their pupils who are selected by musical aptitude. The three which come to mind are Camden School for Girls, La Sainte Union and William Ellis School for Boys, all schools in the labour held L.B. Camden.

Schools know that cognitively more able pupils are more likely to secure the GCSE results needed to boost their market status.  As academic selection tests are not allowed, schools have got away with a proxy instead. 'Musical aptitude' works as such a proxy on two levels. The first relates to parental education and affluence - musical aptitude has to be recognised, encouraged and piano lessons paid for from a young age.

It is also commonly argued that musical ability correlates strongly with IQ.

In my view there should be no need for specialist school admissions of any kind. My inner urban headship school from where I retired in 2003 supported individual talents by organising and paying for appropriate tuition. This included playing musical instruments and in one case sending a talented rugby league player for a one week residential with a professional club.

It needs to be clear that although the Hackney banded admissions system is driven by IQ type cognitive ability tests, this is the opposite of academic selection in that the results are used to engineer cognitively mixed intakes for all the schools in the borough so giving all Hackney students the opportunity to receive a genuinely broad and balanced education that encourages and supports individual talents and aptitudes.

It is only a genuinely comprehensive system that can achieve this.