Five years ago, after the first DfE release of school-by-school data, we wrote about the fact that the data showed that academies did no better than similar non-academies. At the time they were only a handful of us battling the consensus view that academies were clearly better than any local authority involvement.

Time has passed. The Academies Commission and the Education Select Committee both found, after looking at the data, that there was no evidence of better academy performance. And now the DfE itself has produced a report on Multi Academy Trusts (MATs). Their conclusion on secondaries is clear: based on the new Progress8 measure, MATs underperform compared to schools overall.

Our original conclusion, that academies fared no better, changed when "GCSE equivalents" were removed from the 5 A to Cs (including English and Maths) benchmark. In 2014 and 2015 it became clear that, when compared to maintained schools  starting from a similar point, academies improved at a slower rate. The DfE report effectively comes to the same conclusion: not only do Multi Academy Trusts not result in better school performance, but on average they perform worse.

Two thirds of MATs are below average

The DfE found that 66% of MATs studied, two in three, were "below average" in their performance and over half, 51.1%, were "significantly below average": 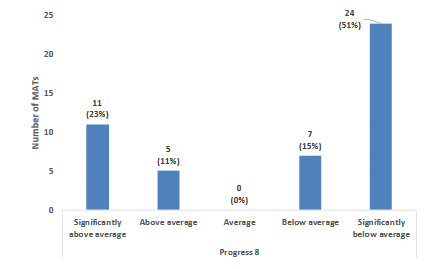 The analysis is based on the 2016 Progress8 results for schools that have been academies for at least three years. It only includes multi-academy trusts that have at least three of these established academies.  There are 47 MATs that qualify, representing 317 schools (59 converters, 239 sponsored and 14 free schools).

Even trusts consisting primarily of Converter Academies are below average

This is a bit of a shock. Converter academies are those schools that were allowed to convert because they were rated as Good or Outstanding. This would be expected to mean they deliver results that are above average. But for the 11 trusts that were principally made up of converters or free schools, 9 out of 11 (82%) were below average in their performance.

There were, of course, MATs that performed well. Ark and Harris, for example, had positive results and the City of London Corporation trust topped the list. These are the trusts often quoted by academy supporters to claim it is a superior model to one based on local authorities. But it is clear from this report that those trusts are the exception and not typical of MATs overall.

To be fair, this isn't the first time that the DfE has produced analysis which showed MAT underperformance. In 2015, just before the general election, the DfE published a report showing that, of the 20 largest trusts, only 3 were above average for value added, the precursor to Progress8. Click here for my post on this.) Last year the DfE produced a very similar report to this one - showing that, again for value added, 67% of MATs underperformed. (My post here.)

Over three years, over three sets of DfE analysis, the record of underperformance is consistent and clear. This evidence was ignored by the previous Secretary of State when she proposed last year that all schools should become academies. Is it too optimistic to hope that the current Secretary of State, Justine Greening, will be less ideologically wedded to the academy model and look for a way to improve schools that is based on the evidence?

Note 1: The DfE is not alone in coming to this conclusion. In the last two years PWC, the Sutton Trust and the Education Policy Institute all separately analysed the data and found that multi academy trusts underperform. (see my posts here, here and here.) I am not aware of any analysis in the last two years that comes to a different conclusion.

Note 2: The DfE report also covers primary schools. This shows neither better nor worse performance for primary MATs. I hope to come back to that in another post.

Aren't the MATs that do well

Aren't the MATs that do well situated in London where most schools do well not least because they are so well funded? A situation not likely to change with the new national funding formula which, as it currently seems, rather than redressing the balance between very well funded areas like London and the f40 areas seems keener to take money away from the primary sector and give it to secondary schools.

All but one of the best

All but one of the best performers at KS4 are situated primarily in London: ARK, Harris, City of London Corporation, Diocese of London, Diocese of Westminster Academy Trust.   Outwood Grange is the only one which operated primarily outside London.  See Schools Week analysis which confirms Henry's: 'Over half of trusts "significantly below average"'.

London has outperformed the rest of the country for several years thanks to a combination of the London Challenge, a large number of high-performing children from an immigrant background and better funding.   It's little surprise, therefore, that the best performing academy trusts operate primarily, if not exclusively, in London.

Some previously-praised MATs are poor performers:  CfBT, once cited by Gove as a group which could open schools if it wanted to, is now a troubled MAT which is dropping its failing schools:  Greenwood Dale, Gove said its then CEO, Barry Day (later knighted), one of Gove's Magnificent Seven, headed a MAT which 'generates outstanding academic results'.