The DfE today released analysis of the performance of multi-academy trusts, primary and secondary, in terms of value added. The results for secondaries show significant underperformance: 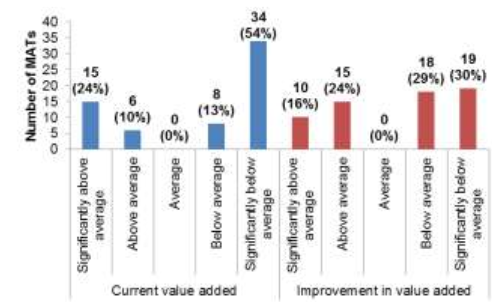 These results should not be a surprise. Last year the DfE found that only 3 of the top 20 academy trusts were in the top half for value added and PWC reported this year that academy trusts are performing worse than local authorities.

The previous reports have been based solely on sponsored academies but this analysis is different in that it includes both sponsored academies and converter academies. Given that converters were previously Good or Outstanding schools, this might be expected to provide stronger results. But this is not the case.

The study also looked at the length of time schools had been with their trust. It might be assumed that academies would perform better, the longer they had been with a trust. However the DfE found "zero (linear) correlation between the current value added measure and the different length of time schools have been within each MAT, by time open" - for both primaries and secondaries. The DfE also found no evidence that MATs did better if performance was analysed by prior attainment, disadvantage, SEN or English as an additional language.

This analysis comes at the same time as a report from the Education Policy Institute, summarised in Schools Week, that "twenty of the largest multi-academy trusts (MATs) – running more than 300 schools – fall “significantly below” the national average for improving pupils’ attainment".

The conclusion is clear: There is no basis - in terms of evidence rather than ideology - for further academisation. Indeed putting more schools into MATs is likely, on the basis of the DfE's own analysis, to result in poorer achievement for students.

And yet the Government is

And yet the Government is still committed to turning all schools into academies.  The DfE still churns out misleading and dishonest propaganda in favour of academies as I pointed out in my last post.

The clarion-cry of 'freedom', the supposed reason why schools should become academies, is being exposed as just so much bluster and clanging noise.  Schools which become academies and join MATs are only allowed as much freedom as the trustees are willing to award them.  Ironically, non-academies will find they have far more freedom than academies in MATS because, as we have pointed out continuously since 2010, local authorities do NOT control schools.  But MATs do.

You made reference to our

You made reference to our (EPI) report on MATs and LAs, for info the full report is available here:
http://epi.org.uk/report/school-performance-multi-academy-trusts-local-a...

Given that we are employing essentially the same methodology as DfE (based on last year's statistical working paper) we reach very similar conclusions in terms of the spread of results for MATs.

To pick up on your point about impact by length of time open, for SEN etc. My interpretation of DfE's paper was that this analysis was included to demonstrate that actually the measures they've proposed (and I think they remain proposed measures) are largely independent of all of those characteristics - so simply saying a MAT has high levels of disadvantage of low prior attainment isn't an excuse for performing badly on them, there are other MATs with similar characteristics that are doing much better. We'll be doing more analysis of that but it's actually a pretty good thing for DfE to be putting in there.

JonMany thanks for that link.

Many thanks for that link. That is very useful and I will study the full report with interest. I note that one of your recommendations (according to Schools Week) is very clear on whether DfE should proceed with its current policy:

Though this is a useless

Though this is a useless statistic if we don't know how well/badly non-academy schools are doing. There's no comparison.

See Schools Week summary of EPI report which compares MATs with LAs here.  Follow link in Jon Andrews' comment above for full EPI report.  The EPI report says,  'Taken in aggregate there appears to be little difference in the improvement seen in schools within local authorities and schools within multi-academy trusts.'

The compairson is actually to all schools, including non-academies. So when the DfE says that two-thirds of secondary MATs underperform, this is compared to all secondary schools.

The conclusion is clear: Schools that are not in a multi-academy trust perform better, in terms of value added, than schools which are in an MAT>

For the reasons why Academy

For the reasons why Academy Trusts under-perform LA schools see