The white paper justification for academy conversion is pathetic

The Education White Paper, published today, confirms the forced conversion of all English schools to become academies by 2022. This will cost hundreds of millions, at least, and cause massive disruption. As evidence that academies improve performance, the white paper makes just two claims (in section 4.3):

1) "2015 results show that primary sponsored academies open for two years have improved their results, on average, by 10 percentage points since opening, more than double the rate of improvement in local authority maintained schools over the same period."

2) "2015 GCSE results show that secondary converter academies are performing 7.2 percentage points above the national average, with 64.3% of pupils achieving five or more good GCSEs, including English and maths."

To describe this as a flimsy justification for the largest structural change in decades would be an understatement.

Converter academies are those schools allowed to convert because they were already rated "Good" or "Outstanding". Their results will always have been above average and so the fact that they are still above average says nothing about the benefits of conversion.

A proper comparison has been undertaken by NFER (National Foundation for Education Research). It published its report yesterday and stated: "There was no significant difference in overall school performance between converter academies and similar maintained schools on any measure."

Both Nicky Morgan and Michael Gove have greeted each year's exam results with the claim that converter academies have higher absolute results (ignoring the fact that the stronger performing schools were those that converted) and claiming that the increase in sponsored academies was greater than that in non-academies.

Schools that start with lower previous year results grow their results at a faster rate. The fact that more sponsored academies start with worse results should mean that their average growth will be greater than that for schools overall, even though their results grow at a slower rate than similar schools. However this year the government was not even able to make that claim.

If similar primaries are compared, then local authority maintained schools clearly outperform sponsored academies, increasing their key stage 2 SATs results by an average 6% pts more on average (or almost two pupils per school in a one form entry primary): 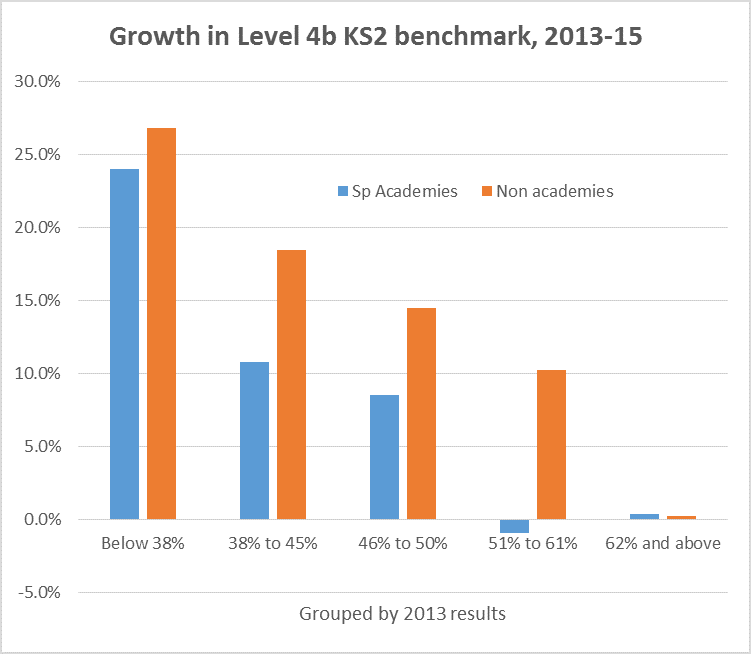 A massive restructure without evidence

The white paper states that the changes are needed because the recent international PISA comparison showed "our education standards have remained static, at best, whilst other countries have moved ahead." While this view can be challenged (see here) we can all agree that we would like to see our results improve.

However, to quote Bernie Sanders, "just because something needs to be done, there is no reason to do something stupid".

The forced conversion to academies is equivalent to responding to Spanish football clubs being better than British ones by deciding to build lots of new football stadiums. It isn't the solution Spain used, there is no evidence it would bring benefit, it would cost hundreds of millions of pounds and cause huge disruption.

Academisation has no more evidence than that would have. It isn't the method Finland or the East Asian countries used to succeed, it will cost hundreds of millions and cause huge disruption.

Thanks for this and your

Thanks for this and your previous Henry. Just caught part of Nick Gibb on Newsnight yesterday appearing to justify the fact that outstanding schools are being required to become academies so that they will be able to rescue all the rubbish academies - Alice Through the Looking Glass Stuff! Oops! The punctuation police will be after me !! 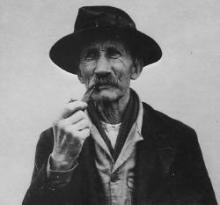 What is to be done? I despair

What is to be done? I despair.

Thanks for the link to my

Thanks for the link to my article on the demise of LAs Paul.

I find the white paper extremely depressing. No good can ever come from bad legislation and this would be very bad if passed.

James - I followed the

James - I followed the conversation on Conversation.   The National Curriculum will be policed through tests as you say.  The DfE made this clear in its response to the petition to scrap SATS.   ‘The best way to prepare pupils remains to focus on teaching the new national curriculum.’  There will be no opting out for academies.

The law already allows schools to be run for profit.   A Policy Exchange document, 'Blocking the Best', published before the 2010 made this quite clear.  All that was required was for schools to become 'independent' and they could outsource to a for-profit education provider.  Gove was present at the launch of 'Blocking the Best' and said he would let groups like Serco run schools if they wished to do so.    A link to the YouTube recording of the event is here.  The Gove quote is about 24 minutes in.

You're right in saying in your article that the academy transfer market will grow.  The DfE told me over 100 academies had changed hands up to the end of August 2015.  The DfE is refusing to let me know how much these transfers cost apart from the cost of 23 of them after being directed by the Court.  Since I wrote about it here, the DfE told me the figures will be published in the future but I haven't been told when this will occur.  I think it will be later rather than sooner.  More academies have been transferred since the end of August so the cost will have increased further.

FullFact checked Morgan's statement on Question Time 17 March that 'Academisation does absolutely raise standards. What we see is that actually having a sponsor, having somebody else running the school, than a local authority, absolutely does drive school improvement.'    Full Fact concluded:

'It’s far from certain that becoming an academy raises standards. The evidence is mixed, and in some cases suggests there’s little difference at all. '

Morgan's claim that academization 'absolutely' raises standards is another of her unsupported, misleading statements.

Brilliant article that touches on a lot of what we are trying to fight back against as parents by keeping kids off school on May 3rd to SUPPORT schools & teachers via https://letthekidsbekids.wordpress.com/