No, academies were not on target to become the majority by 2022

Updated version: Figures based on primary and secondary schools. 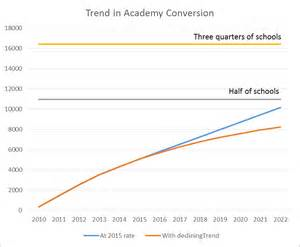 Sometimes I wonder if government ministers just make it up on the spur of the moment. On Radio 4's Today programme yesterday, Schools Minister Nick Gibb was faced with having to explain why they were forcing all schools to become academies, given the lack of evidence that it improves performance.

He claimed first that by 2022, "even on current trends", the "vast majority" of schools would be academies anyway. He then went further: "If we look ahead to six years time we will be in the position where something like three quarters of schools will be academies."

There is a problem with this claim. It simply isn't true. Here are the figures for schools converting:

By the end of 2015, including the academies established before 2010, there were 5,061 academies. If we assume that last year's figure, of 675 mainstream primary and secondary schools converting, continues in future years, then the majority of schools would not have transferred until 2024 and it would not reach 75% until the 2030s. (There are 20,147 mainstream state schools in England, or a total of 21,891 including special schools and PRUs.)

So, no, Mr Gibb: three quarters of schools are not set to convert by 2022.

Also the number of converting schools is declining, by 15% in 2014 and 13% in 2015 to that figure of 675. If we assume this declining trend were to continue (as most schools who want to become academies will already have done so), reducing by an ongoing 13% a year, then the majority of schools would not have transferred even by 2050.

So if 675 schools a year converted, academies would represent 47% of schools by 2022. If the declining trend continued it would be just 38%.

The estimate of a 13% decline is probably too sympathetic to the government. In January and February 2016 just 73 schools converted to academy status, a decline of 38% on the first two months of 2015.

This perhaps explains the need for the white paper. The ongoing decline in conversions meant that it would never be the case that the majority of schools would become academies. The only way to achieve it was coercion.

The figure of 20,147 mainstream schools in England (16,766 primaries and 3,381 secondaries) comes from this DfE statistical release and is for January 2015. There are also 971 state-funded special schools and 362 Pupil Referral Units. These have not been included because most media discussion is based solely on the figures for mainstream primary and secondary schools.

The news this morning said

The news this morning said Nicky Morgan would tell the NASUWT conference she had no intention of backtracking on her policy to force all schools to become academies.

My parents were life-long Conservatives.  They both joined the Air Force in WW2 to prevent the UK becoming a dictatorship.  This Government shows by its example that it has contempt for democracy.   It talks about British Values - schools are supposed to promote them.  But 'British Values' is an empty phrase when used by this Government.

Democracy, Mr Cameron, is rule by consensus and with the will of the people.  It is not ramrodding policies through Parliament just because you have a majority there.

I'm glad my parents are not around to see this - they would have felt betrayed.

Just heard on the news that

Just heard on the news that Morgan was booed at the NASUWT conference.   I'm not  a fan of booing someone who accepted an invitation to speak.  Utter silence followed by a dignified walk out would have been a better response but that's difficult to coordinate.  Or a slow handclap like the one the Women's Institute did when Tony Blair used the WI AGM to push his political ideas (although I'm not sure what the WI expected when they invited a politician to speak).