by Henry Stewart
Posted: 29 Jan, 2015
10
Regular LSN readers will know that each year, when the GCSE school league tables are published, I carry out an analysis of the comparative performance of sponsored academies and similar community schools. In the past this has been in response to exaggerated claims from the Secretary of State about the academy performance.

No such claims appear to have been made this year. This could be because Nicky Morgan has a different approach to Michael Gove. Or it could be because, even comparing all sponsored academies to all community schools, the academies did worse. As has been widely noted the 2014 GCSE figures, with equivalents largely removed, are lower than in 2013. The average fall at sponsored academies was 5.6%, compared to 4.4% at community schools (and 4.2% at converter academies).

To compare similar schools, I have banded them according to their 2013 results. In every band the figures for community schools fell less than (or, in one band, rose more than) in the sponsored academies. This was perhaps to be expected, as it was widely known that sponsored academies made far greater use of GCSE equivalents: 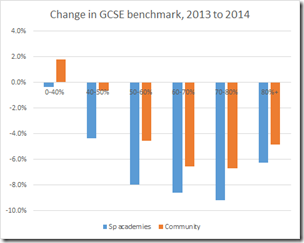 As in previous years there is an inverse relationship between last year’s results and the change from 2013 to 2014. Those with GCSE results below 40% did, on average, increase their figures. Those above saw their figures, on average, an increasing fall in line with the level of the 2013 results (until the 80%+ band). 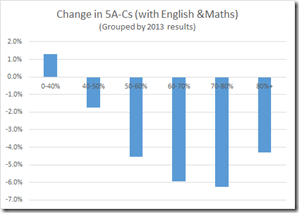 Permalink Roger Titcombe
Thu, 29/01/2015 - 20:09
Well done Henry. We used to hear nothing from New Labour except the continual repetition of the mantra that, 'Academies are improving faster than LA schools'. PWC were wheeled out to support the claim. What would they know about how the 'improvement' was achieved?

Well now we know that they are in fact declining faster than LA schools and this time it's the truth.

So I had to laugh at the DfE response to Hunt's criticism of Gov't policies. The spokesperson said:

'Hunt did not appear to understand that sponsored academies would improve faster because they had further to go...'

The other type of equivalent exams were what are now being described as 'unregulated IGCSEs'. This Government allowed IGCSEs to count towards league tables in 2010 to create a level playing field between independent and state schools, the Gov't said. Nick Gibb said at the time the Gov't had no business telling school what exams to take.

But the removal of IGCSEs is having an odd effect and one that might render league tables meaningless. Bourne Grammar School, for example, is listed in league tables as the worst-performing school in Lincolnshire with a 0% result. This is nonsense of course. 98% (as you'd expect in a selective school) achieved 5+ GCSEs A*-C in 2014.

Permalink Janet Downs
Fri, 30/01/2015 - 16:16
And still politicians push out the same mantra about the superiority of sponsored academies over non-academies. This was Baroness Garden of Frognal (Lib Dem) in the Lords yesterday:

'As sponsored academies mature, they continue to improve. In sponsored academies open for three years, the proportion of pupils achieving five good GCSEs including English and maths has increased at double the rate in local authority maintained schools...'

Permalink John Mountford
Fri, 30/01/2015 - 22:02
In the latest report to be published by the Public Accounts Committee, 'School Oversight and Intervention', the government came in for a panning for neglecting proper oversight for some schools in England - yes, you've guessed it ACADEMIES!

"Problems in some schools in England are going undetected "until serious damage has been done", MPs say."

Read more about it here:

But the DfE is blighted by the same condition as the good Baroness Garden of Frognal - can't contain their enthusiasm for all things academy and can't see further than the gates to the nearest academy school. To put it another way, they are all suffering from HSDS, heavily selected data syndrome!!

"The Department for Education has focused on increasing schools' autonomy but it has done so without a proper strategy for overseeing the system. Confusion about the roles and responsibilities of the Department, the Education Funding Agency, local authorities and academy sponsors has allowed some schools to fall through gaps in the system, meaning failure can go unnoticed."

She added: "We hope that the Department will respond to our recommendations fully in order to reduce the likelihood of further unforeseen school scandals, like the 'Trojan horse' affair in Birmingham.""

Pretty damning, right. But, fear not the ever-present DfE spokesperson, (fondly referred to by those not under the spell of academisation as, the purveyor of lies and damn lies) was quick to respond, saying the report "does not reflect the real picture in England's classrooms". To make it even clearer to doubters like yours truly, they went on to emphasise the point even more, The Department for Education disagreed with the committee's assessment, saying it had a "strong oversight of schools". (it's just a meddling bunch of cross-party MP's right. So what?)

"We have already intervened in more than 1,000 schools over the past four years; pairing them up with excellent sponsors to give pupils the best chances.

"That compares with the years and even decades of neglect many schools suffered under local authority control."

As ever in these cases (increasing in both number and seriousness by the hour) it's a matter of 'buyer beware' (that's the taxpayer, of course).

I will leave the last word to the Committee, here offering an explanation for the problem facing the system. The DfE's "narrow focus, on exam results and Ofsted inspections, meant it had "not spotted important failures" in some areas until it was too late,"

Permalink Janet Downs
Sat, 31/01/2015 - 08:14
Thanks, John. I loved the DfE comment. It told the BBC that there were '41 local authority schools that have been in special measures for more than 18 months, compared to just nine academies.'

But there are more than four times the number of non-academies (17,300) to academies (4,200), so the proportion which have been in special measures for more than a year-and-a-half is roughly the same.

Funny how the DfE continues to rely on people's ignorance of stats. Or is it because the DfE itself is ignorant? Perhaps the DfE should attempt my statistics quiz.

Permalink Janet Downs
Sat, 31/01/2015 - 08:24
John - your suspicion that the DfE considers select committees and the like as 'just a meddling bunch of cross-party MPs' is confirmed by Gove's attitude towards them. In November 2012 Gove attacked the Public Accounts Committee and the National Audit Office after they'd both issued critical report. Gove said they were too risk averse (ie cautious about how taxpayers' money is spent) and he wanted to move 'further, faster, now'.

But now we're discovering the truth of the saying, 'Fools rush in...'. The sorcerer's apprentice may have been dismissed but the mess he made is toxic. The more fragrant Morgan can't disguise that.

See the full report here - a long haul but well worth the effort.

Permalink Janet Downs
Mon, 02/02/2015 - 08:41
Henry - Cameron's still pushing academy conversion and sponsorship as a cure for 'mediocrity'. This is despite evidence going back pre-2010 that academy conversion wasn't a panacea for school improvement never mind the increasing volume of research and analysis (including your own which the Ed Select Committee said had been referred to by several witnesses in their investigation of academies and free schools) which confirms academy conversion is no magic bullet. (It's also the most 'resource intensive' of DfE initiatives, the Committee said.).

I suppose there's no chance that Cameron, Gibb, Morgan, Nash and Gove (apparently still pulling the strings) will take any notice.